5th Anniversary of a Manifesto

On 12 February 2011 the Montreal-based daily newspaper Le Devoir published a manifesto written by nine former terminologists at the Office québécois de la langue française (OQLF, French Language Bureau). In the following days the first signers were joined by ten other former OQLF’s terminologists. They were eventually supported by more than a hundred other terminologists, translators and copy-editors.

This manifesto denounced the OQLF’s new orientation adopted in the early 2000’s and favouring acceptance of loan-words and loan-translations over proper standard terms already in use in French. The joint signers argued that the new approach is in its core more lexicographical than terminological. They complained that the OQLF had given up its time-proven methodology. They also questioned the appearance in a terminological dictionary of colloquial words; it could be added that the tag “langue courante” – colloquial language –, already an oddity in such a specialised work, is not even systematically appended to them.

Five years later, the OQLF has not modified its approach. Its terminological dictionary (GDT, Grand Dictionnaire Terminologique) continues to propose loan-translations that have long been criticised, for example these word-for-word translations from English: comptoir de cuisine (< kitchen countertop, instead of plan de travail), glace noire (< black ice, instead of verglas), etc.

Compared with the GDT, Google’s automatic translator would appear almost as reliable, providing at times the same word-for-word translations, as evidenced by these examples: 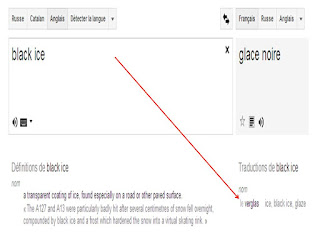 In the latter case, Google’s automatic translator is even more reliable than the GDT. Besides the word-for-word translation of black ice as glace noire, it suggests the standard word verglas: 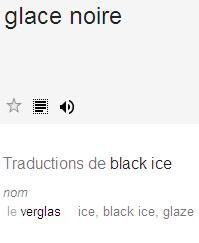 As a matter of fact, over the years the OQLF chose to correct only the most obvious spelling or grammatical mistakes that have been pointed out to them. That is indeed the least that could be expected from Quebec’s language watch dog.